The human species has a natural affinity for beauty. We might scoff at such a concept because it sounds too dramatic, but it’s the truth. If you go to an airport, chances are that you’re boarding a flight to go somewhere. And yet, airports are more than just airplanes; they have artwork and sculptures to attract the attention of travelers. It’s the same with other buildings. While hospitals have certain features in common, and stadiums conform to certain structural patterns, and schools have a specific look, they don’t all look alike.

That’s because, in addition to the building components like a roof, walls, doors, etc. that are common features in structures, the architect who designed the plans had more than function in mind. At Danpal, we believe in beauty and that’s why our facades are so dazzling. The variety of colors, textures, and finishes gives an architect the freedom that’s needed to give a building a unique image.

The aesthetics of a building reflects individual preferences, but no one who works inside a building wants to have the day’s tasks interrupted by a leaking roof. The same goes for people in their living space; they want to have a home that’s attractive on the outside, and comfortable dry on the inside.

It’s for that reason that Danpal facades are able to shield a building from the harm that weather can cause. Moisture inside a building can lead to serious problems in the structure, but it also can cause health problems to develop, especially if the occupants of the building already suffer from allergies, asthma, or other respiratory issues. Rain, snow, sleet, hail and wind are powerful weather foes, but a Danpal façade is a building’s friend. 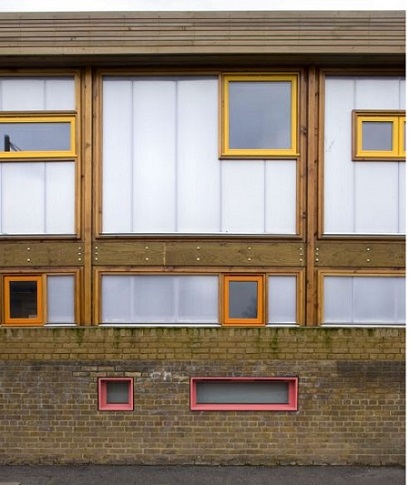 As we’ve already noted, esthetics is an important part of an architect’s design. Can you imagine what it would be like if every building on the street where you live or where you work looked exactly alike? We won’t even consider the trials and tribulations of trying to figure out which one is the one you’d need to enter in a community of identical buildings. But facades give a building its individuality with artistic touches that make a difference.

Visualize how striking your building would look if you alternated light and dark colors in order to create a vivid impression that catches the attention of people passing by. Layering different shades of a particular color can create depth to the perspective of a building. All buildings are not created alive and Danpal facades celebrate the unique features that make them stand out from the crowd.

THE TECHNOLOGY BEHIND A DANPAL FAÇADE

We’ve talked about the function of a building. We’ve explained a building’s aesthetics. But there’s one more thing that makes the difference in a Danpal façade, and that’s technology. Danpal, a company which has been a leader in the building industry for over 30 years, prides itself on its innovative flair. Our microcell technology keeps the facades resistant to moisture.

Energy can’t escape because of thermal insulation. We use a snap-lock connection system and double-click locking seams to give a building the utmost in security and high-load resistance.